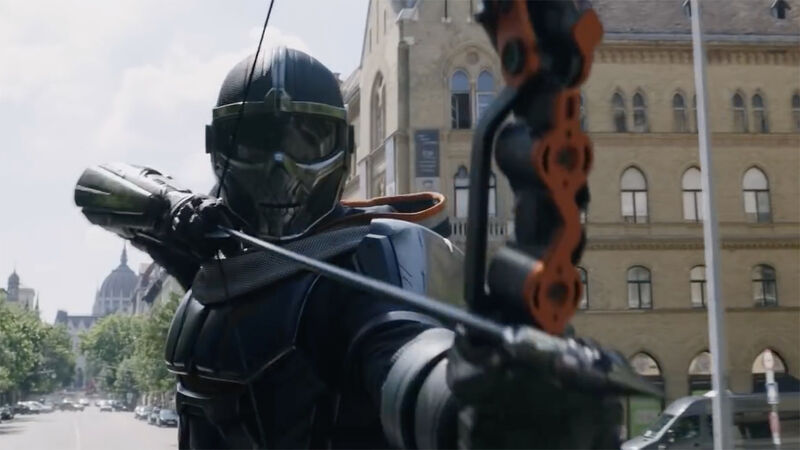 Why Taskmaster Is One of Marvel’s Most Complex Villains

Note: Some of the links below are affiliate links, meaning, at no additional cost to you, Fandom will earn a commission if you click through and make a purchase.

A new supervillain is circling 2020’s?Black Widow film, a big bad who has thus far not been introduced to the Marvel Cinematic Universe, but who looks more than ready to take on formidable Russian spy Natasha Romanov.

Okay, so his name doesn’t exactly strike fear into the heart of his enemies; he sounds more like spreadsheet software than he does a supervillain, and in the UK he shares a name with a goofy TV game show.

Disney+ is the only place to stream favorites from Marvel and more. Watch now!

Nonetheless, Taskmaster is one of the more interesting villains from the annals of Marvel’s comic-book history. His unique selling point is that he’s just like all the other bad guys on the block: literally. Taskmaster has mnemonic abilities that the Marvel canon dubs “photographic reflexes,” meaning he can mimic and master any physical movements just by looking at them — so he’s as dangerous as whoever stands him down, and there are precious few heroes with half as much skill.

Taskmaster works as a mercenary, meaning there’s no moral quandary a good paycheque can’t solve — in the past he’s both fought against superheroes and villains as an anti-hero. He made his first comic-book appearance in 1985 in The Avengers #195 and then his full debut in the following issue, where he battled Captain America and Iron Man to a stalemate, able to predict each hero’s moves perfectly. To this day, Taskmaster still carries a shield like Steve Rogers and a bow and arrow à la Hawkeye — his true skill is copyright infringement.

In his own mini-series Taskmaster: Unthinkable in 2011, he got his very own origin story. Real name Tony Masters (which explains the name, sort of), he hailed from the Bronx and was a SHIELD operative tasked with bringing down a Nazi who had developed an off-brand version of Captain America’s Super-Soldier Serum. After injecting himself with the good stuff, Masters developed photographic reflexes, but in true Homer Simpson style, all the new stuff he learned just pushed old memories out of his brain, including all knowledge of his wife and former life. Ah, the required tragic back-story — no self-respecting bad guy should be without one.

Although he lacks any true superpowers, Taskmaster is still a bad guy par excellence, and is the only game in town when it comes to showing other supervillains the ropes. In fact, in more recent comic-book appearances, Taskmaster has taken on the role of trainer in all sorts of criminal cartels and dodgy organisations — he even trained Cap’s old friend Crossbones, whose MCU incarnation was seen in Captain America: The Winter Soldier (Watch Now on Disney+),?Captain America: Civil War and Avengers: Endgame. This chimes perfectly with Taskmaster’s appearance in Black Widow. We know precious little about Natasha Romanov’s history, but we do know she was trained to be a bloodthirsty killer by nefarious types, so Taskmaster would be a perfect fit.

The most interesting thing about Taskmaster, arguably, is how he might potentially be a way to introduce Deadpool into the MCU. In the comics, the only foe who has been able to offset Taskmaster’s copycat capabilities is Wade Wilson, whose unpredictability and general insanity rendered the supervillain’s abilities useless — because you can’t second guess crazy. Deadpool and Taskmaster have loads of history, from comic-books to videogames, so there’s every chance that the memory man could eventually also be the perfect foil for the merc with the mouth.

Quite how Taskmaster will be adapted into the Marvel Cinematic Universe remains to be seen, but in the meantime, Taskmaster can be found in Spider-Man on PS4 where he made Peter Parker dance to his demented tune, and he’ll make an appearance in the forthcoming Marvel’s Avengers open-world videogame.

Will Black Widow be up to the task of defeating him in her solo film? We know who our money is on: if there’s one person who’s more adept at mimicking people from all walks of life, it’s Scarlett Johansson…

Disney+ is the only place to stream favorites from Marvel and more. Watch now!

AB Gray
Graybot
I will proofread your article even if you don't want me to.