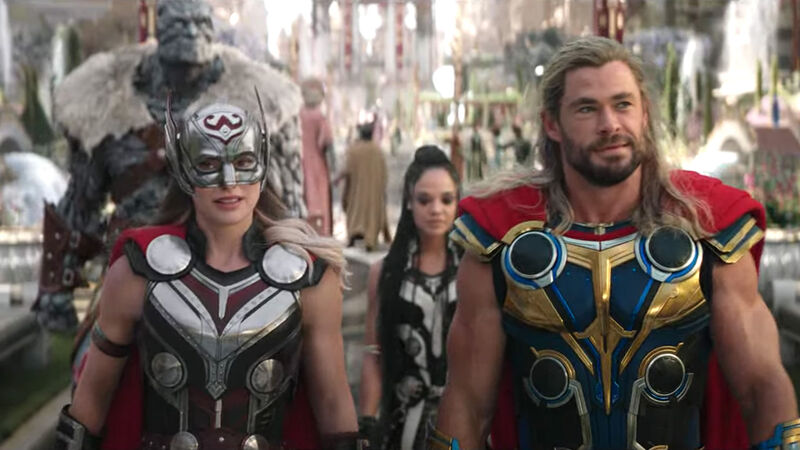 Thor: Love and Thunder Fans Have a Voracious Appetite for One Breakout Character

The following article contains MAJOR SPOILERS for Thor: Love and Thunder. Proceed at your own risk.

Okay, so the feverishly anticipated Thor: Love and Thunder arrived. And it’s been met with mixed reviews. The fourth Thor movie promised more of the zany comedy injected into the franchise by director Taika Waititi as well as a return for Natalie Portman’s Jane Foster and Christian Bale’s mouthwatering MCU debut as the ominous Gorr the God Butcher. It delivered.

But did you all want more of Thor’s Gorr (sorry not sorry)? Well, it turns out you did, as 54% more of you headed to Gorr’s MCU community page to learn a whole lot more about this tragic antagonist.

Gorr’s Not a Bore

Amid the polarized responses to the film, fans at Fandom’s MCU community loved Bale’s turn as the sickly-looking bad guy pretty much across the board. Even if the film as a whole clocks in as one of the lower performing Phase 4 movie premieres. That said, it beat out Thor: Ragnarok, outperforming the third Thor movie by 40% on the Marvel wiki and 60% on the MCU community — illustrating noteworthy growth in those communities since 2017 when Ragnarok was first unleashed. Guys, the MCU is attracting more and more fans all the time…

About Gorr, community member Kareidosukopu said they really like him, adding: “I didn’t think they’d make him so ‘relatable’”.

KeiytOfficial, meanwhile, wrote: “Gorr is an excellent villain. His motivation is made perfectly clear, which aligns quite well with what happens to him, he poses a genuine threat, and he is actually also quite intimidating at times.”

Greater good added: “Christian Bale was fantastic as Gorr the God Butcher. He may be the scariest villain the MCU has given us, but he also had a motive that was very relatable. He was given deeper characterization and better motivation in the prologue than most of the MCU’s villains have been given in [their] entire movie.”

We did say “pretty much across the board” but there are always dissenters, with Neutron Lightning one voice who felt the MCU wasted Gorr’s potential: “Gorr could have been like Zemo in Civil War, serenely reminiscing about the family he lost while sticking to a shred of honor — instead of the goofy jokery villain they turned him into.”

But much as we all love villains – and we have proof, statistically, with the Villains community only last month hitting the number 9 spot in our top ten trending wikis, growing 5% in the two weeks prior – it’s another character with a far smaller but very significant role in the film that has proved most intriguing for fans. Love. Yes, the Love of the title, and Gorr the God Butcher’s deceased daughter, resurrected by Eternity and adopted by Thor as his own following Gorr’s passing. She got 132% more visitors to her page as fans attempted to work out how she might figure into MCU future.

Those with even a passing knowledge of Marvel movies will know that Thor has up to now been played by Chris Hemsworth. Well, his daughter, India Rose Hemsworth, plays the role of Love in Thor: Love and Thunder, with the character appearing at the beginning but only attaining her name at the end. This led to the unprecedented trending of the young actor’s community page. It’s a rare thing to see an actor’s page hit the top 10 after a big MCU premiere, but that it did, coming in at number 7. Which means she beat her dad. Go, India!

Of course, we know lots about Thor aka Thunder already, and little about Love so it makes sense that fans are keen to learn more about the daughter of a deity slayer, and given Chris Hemsworth’s legacy and popularity, it also makes sense that fans are interested in the young actor. In the interests of keeping it in the family, incidentally, Hemsworth’s wife, Elsa Pataky, also had a role in the film as a Wolf Woman.

Yes, yes, Eternity also received a significant bump in traffic – a 146% increase. Clearly, you were all trying to get to the bottom of just what the dickens this fantabulous new MCU addition is while trying to unpack the online conversation around why the heck Thor didn’t just seek out Eternity in the first place when attempting to undo Thanos’s evil-not-evil deeds back when the ol’ Infinity War broke out. As we know, instead, he opted to go through the kerfuffle of quantum leaping as the Avengers enacted ‘Endgame’. Different rules? Too dicey? It’ll all come out in the wash. Or not.

Eternity, in case you’re wondering, is one of the universe’s four Cosmic Entities responsible for creating the Infinity Stones. There’s more at the wiki if you want to explore further.

Some fans are wondering whether Love might grow up to be Cosmic Entity Mistress Love from the comics with Kareidosukopu pointing out that “she is referred to as Love and have [sic] inherited some sort of cosmic power from Eternity.”

SpiderFan2104, meanwhile, reckons Gorr’s daughter will follow a different path: “I think … Love, is going to be the successor of Thor and potentially a lead member of the Young Avengers.”

Possibly. Neutron Lightning, however, channels a lot of their energy into questioning the MCU’s inclusion of Eternity, with this to say: “Eternity. What the heck are you doing, movie? Now obviously, the comics were full of powerful beings like Eternity, the Living Tribunal, the One Above All, etc. But in the MCU, introducing Eternity after Arishem just feels almost redundant. Arishem was retconned into being an authoritative figure, not unlike Eternity, so introducing the real Eternity just seems convoluted. Do they know about each other?”

Arishem, of course, made an appearance in The Eternals which was released last year.

One significant character we haven’t factored in yet is Jane Foster – whose return to the MCU for the first time since Thor: The Dark World (What If…? aside) prompted a 34% increase in visits to her page, making Jane Foster the number three trending page, and number two trending character.

Well, Kareidosukopu thought Jane Foster “was adorable and amazing” and some fans think (and hope) she’ll return despite the fact that she’s been battling cancer and apparently died and went to Valhalla where she encountered Heimdall.

SpiderFan2104 wrote: “Now they can make a new movie with hopefully Jane back as the Mighty Thor AND Tom Holland’s Spidey where they have to fight against Knull the Symbiote God and the symbiotes!!”

Jane Foster was a highlight for many, with plenty of community members saying so. KeiytOfficial wrote: “Jane is surprisingly great in this movie, she has a genuinely good arc, and I feel like this is the best part of the movie. The fact that they directly based her part in the story off the comic storyline is actually very compelling and even kind of emotional.”

What’s Next for Phase 4?

Another thing fans are curious about is where Phase 4 could be heading, now that we’ve made a substantial dent in the Phase 4 releases. Phase 4 is our number 5 trending MCU page, with an 88% lift in traffic as fans remind themselves of where we’ve come from and what we’ve yet to explore.

It seems that some fans are confused as to what is actually included in Phase 4, with BEJT posting by way of clearing things up: “As of She-Hulk, yes, we have finished all the projects 100% explicitly confirmed to be Phase Four. But I think it’s pretty clear we’re supposed to assume we’re in Phase Four until further notice. Feige did recently hint we’re in the later stages of Phase Four already (which took people by surprise).”

Deathviper3000 agrees that Marvel Studios boss Kevin Feige hasn’t yet been clear about the end of Phase 4, adding: “We don’t have any confirmation of when Phase four is going to end/when Phase five is going to begin. So far, every phase has ended with an Avengers film, so I’m sure phase four will end with some kind of major threat. Kevin Feige has not confirmed when phase four will end. Phase three had twice as many movies as phases one and two had. If they do the same again, Phase four could have closed two 24 films, not to mention the shows. So we might be in phase four for a while.”

Others in the discussion have added titles believed or confirmed to be part of Phase 4, which you might find helpful.

What About Zeus and Hercules?

Interestingly, newcomers Zeus (played by Russell Crowe) and Hercules (Brett Goldstein) featured outside the Top 10, even though both appeared in an end-credits stinger. In the sequence, Zeus is revealed to be alive after being stabbed by Thor using his own thunderbolt — and is hellbent on teaching mortals a thing or two about fearing gods, apparently jealous of their adoration of superheroes. He summons his son, Hercules, to help him, setting them up as future villains. Head to the wiki if you want to check out what we know about both characters so far – and also to check out their comic-book histories.

It could just be that there’s so much going on in this movie, that there is so much competing for fans’ attention. With Egyptian gods, Eternals, Cosmic Entities, and now Greek Gods (and more – check out the comments below!) in the MCU mix, things in the Marvel Cinematic Universe certainly look set to get interesting…

But before we find out more about what’s next in the MCU (San Diego Comic-Con, we see you!), take a look at some of the other quotes from the community below about Thor: Love and Thunder.

“The Guardians are only in this movie for like 20 minutes max, even though it was implied they would play a bigger role and I honestly wanted to see more of them. That’s kind of disappointing.” — KeiytOfficial

“Any guesses as to the timeline placement of the movie? Thor says it’s been 8 years since he and Jane broke up, and they probably broke up in 2015, so that puts the movie in 2023. My guess is that is it is between Eternals and Shang-Chi in the watch order.” — SuthMaster

“The Zeus mid credits scene was just yawn to me … I was expecting something really exciting. But it was just “Hey, Zeus is going to be the bad guy now.” It would be more interesting if Zeus had been more of a hard cold formidable warrior. But instead, all I see is just a goofy guy who’s angry now. Also, Hercules is not a god. He’s a demigod.” — Neutron Lightning

“i have a question even if he is dead heimdall can he still see if what is happening in the multiverse from the vahalla.” — IIias0328

“The introduction of Omnipotence City adds a fascinating new layer to the MCU’s mythology that I hope will be explored in greater detail down the line. Russell Crowe was very entertaining as Zeus and really sold him as this loathsome, self-indulgent coward. I’m interested to see what they do with Hercules as well.” — Greater good

“It will be a wasted opportunity if they don’t do Thor 5 as War of the Gods movie. It can be like Civil War or Avengers 4.5, with Thor gathering all his friends to prevent earth from becoming their convergence and battle zone, while other heroes on Earth like Moon Knight and Black Panther try to figure out why their Gods are starting to act up.” — Venom1502jw

Gavoondusstuff had this final thought: “Is no one gonna acknowledge the fact there is a god of the dumplings?”

For more about the MCU, check out our article below: