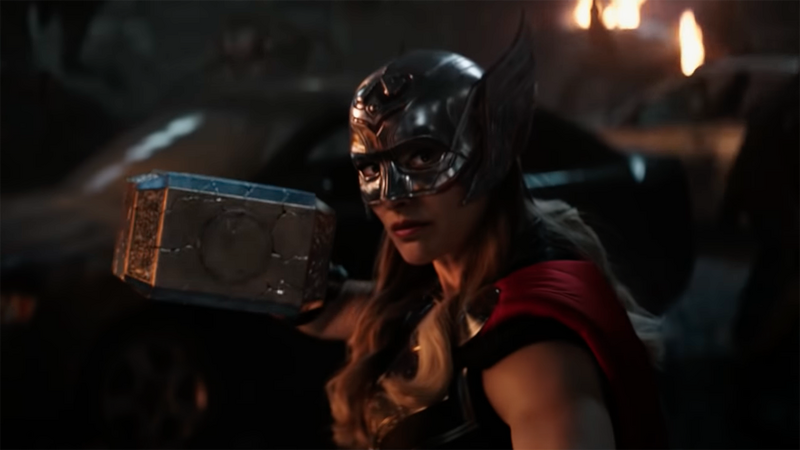 The ‘Thor: Love and Thunder’ Teaser Trailer Has All Eyes on Jane Foster

Fans had been clamoring to get a trailer for Thor: Love and Thunder for months and the gods answered their prayers this week, as the first teaser for the upcoming MCU film was released.

While it truly was a teaser — only offering a taste at the film’s set-up and holding back on plenty for later — there was still much to dive into, as we got our first look at what Thor‘s been up to since Avengers: Endgame when he left Earth with the Guardians of the Galaxy, how things are going for Valkyrie and the residents of New Asgard, and, in the trailer’s final moment, our first glimpse at the return of a important character from Thor’s past.

It was this last point that made an impression that was immediately felt at the MCU wiki, because after a nine year absence, Thor’s ex-girlfriend is back in a big way.

Yes, that was Natalie Portman as Jane Foster seen at the end of the trailer, now wearing the costume and helmet of her comic book alter ego as the Mighty Thor, and wielding what appears to be a reconstructed Mjølnir no less, somehow put back together following Hela destroying the hammer in Thor: Ragnarok.

Outside some photos and a very quick time travel appearance in Endgame, Love and Thunder marks the first time we’ve truly seen Portman as Jane since 2013’s Thor: The Dark World – and with one serious power upgrade (along with Portman’s impressive new muscles).

Not surprisingly, all of this led Jane to get the most attention from the Fandom MCU community in the wake of the trailer’s release. Jane’s page at the wiki shot up 3039% thanks to the Love and Thunder trailer, while the page for Jane’s comic book counterpart at the comics-based Marvel community jumped even more with a 3905% increase.

There was plenty of reactions to Jane at the MCU wiki, with Walker Tom remarking, “Amazing to see Jane Foster as Lady Thor,” and SpiderFan2104 saying Jane “looks so cool. I like that.” AntIsBack meanwhile remarked, “Jane looks good, I just hope she doesn’t overshadow Thor himself.”

BEJT was critical of the trailer in general but still found Jane a highlight, writing, of the teaser, “This would be a fun 6 months out teaser, but it’s just not enough to give me any excitement for a film out in a matter of weeks. Jane does look great though. That’s the bit I do like.”

While we did see what appeared to be Russell Crowe as Zeus, one character the teaser notably did not include was the film’s villain, Gorr the God Butcher, the memorably named nemesis played by none other than Christian Bale.

Some took this in stride, with MarvelSharky writing, “Of course this being a teaser, they leave out Gorr. At least I didn’t see Gorr. I liked that trailer and am still excited about the film,” while AntIsBack was a bit more frustrated, simply stating “WHERE. IS. GORR.”

Gorr being held back — though Hasbro did reveal a first look at his action figure the same day the teaser came out — is not hurting interest in the character though, as Gorr’s page at the Marvel wiki was number one in the wake of the trailer, jumping 2,008%. Even at the MCU wiki, where he was the 8th most popular page overall (with Jane, the Love and Thunder movie page, and topical heavy hitters Moon Knight and Doctor Strange in the Multiverse of Madness among those ranking above), Gorr still made a 2,838% jump. Not bad for a dude with zero released footage as yet.

Many fans took note of a cool Easter egg moment in the trailer – an almost exact recreation of a Thor comic book panel, depicting the sad fate of Falligar the Behemoth (we might presume one of Gorr’s victims?). Just this mere corpse cameo caused Falligar’s page to jump way up to the second most popular at the Marvel wiki, behind only Gorr. This is Falligar’s moment, even if he’s not around to celebrate it.

What else did fans have in mind watching the trailer? Well, there were plenty of predictions on what might happen, folks acknowledging the use of “Sweet Child O’ Mine,” and what Thor’s state of mind might mean for his future.

Check out a sampling:

I predict that at the end of this film, Thor will fully retire so that Jane can continue like Steve and Clint did for Sam and Kate in Endgame and Hawkeye respectively. “Thor is dead. Long live Thor.” – Ra3099
This trailer had a fun tone to it. It was cool to get a little tease of Russell Crowe as Zeus, Jane looks badass and it looks like the Guardians will have a bigger role than I expected them too. – Greater good
Nice use of Guns ‘n’ Roses. And speaking of guns, WOW has Natalie Portman been working out! – RedRoom1984
Am I the only one who feels like the return of the hammer kind of cheapens Ragnarok? …Also, it feels almost degrading to say to Jane, ‘Sure, you can be a superhero, but you can’t forge your own weapon. Here’s my broken one that I don’t need anymore.’ – Neutron Lightning
“My superheroing days are over.” Does this mean that this movie might be Thor’s final appearance in the MCU? – D-ManTheMovieTVGuy
Unfortunately Loki is not here, I hope the director will remember the sun must shine on both of them again. – Monarch Swallowtail

Obviously, this won’t be the only Thor 4 trailer, so we’ll just have to wait and see what will continue to be revealed. One things’s for sure: There will be Gorr!
Thor: Love and Thunder opens July 8.