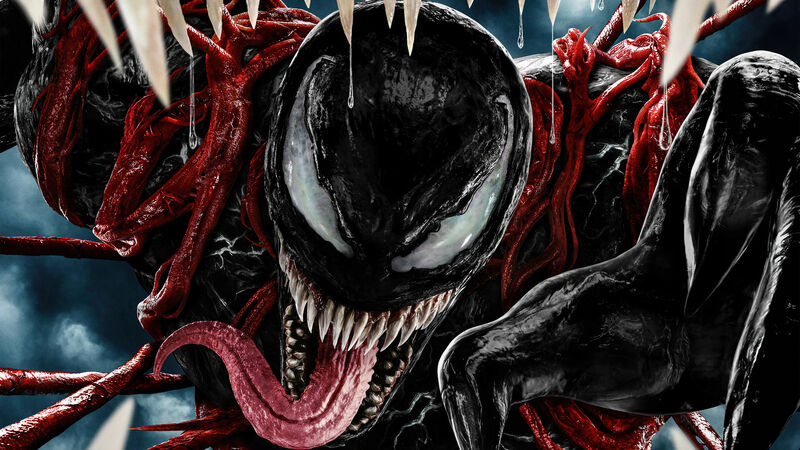 Let There Be Carnage: Nature’s Symbiotic and Parasitic Inspirations for Venom

Ebony and ivory, living in perfect harmony, as Paul McCartney and Stevie Wonder once sang, referring to the utopian co-existence of er, black and white piano keys. Look past the on-the-nose metaphor – because what these two pop music titans are really?talking about, believe it or not, is how people with different skin tones haven’t, historically, harmonized so well – and they’re actually eulogizing symbiosis. “Symbiosis is a generic term for when two or more organisms live close together, usually to mutual benefit,” explains zoologist Dan Eatherley, author of?Invasive Aliens, a Sunday Times Book of the Year. “For example, lichen are a symbiotic relationship between algae and fungi. Or, giant clams and algae: the algae photosynthesize using the sunlight reflected from the clams’ iridescent cells and share the by-products with the shellfish.” Or, say, humans and Klyntar alien symbiotes, like journalist Eddie Brock and Venom?

2018’s smash hit Sony movie?Venom?introduced a character long familiar to Marvel Comics readers, though rights issues necessitated film studio chicanery to sidestep Venom’s Spider-Man origins. Once Brock came into physical contact with the symbiote, it transferred to and transformed him with potentially lethal results, until Brock managed to tame the beast within. Now, though, Venom is back, along with another alien symbiote whose host, serial killer Cletus Kasady, has far more murderous intentions in?Venom: Let There Be Carnage.

If the connection between Brock and Venom wasn’t always exactly in sync – Venom would happily eat people who cross his path; Brock would rather not – the body horror hi-jinks fun eventually spawned mutual understanding and benefits: a viable lifeform for Venom, plus Brock’s super-strength, superhuman agility, and super-useful black alien tendrils that shoot out of his body. Venom may have arrived unannounced and, initially, unwanted; and he certainly does influence Brock’s behavior. But ultimately, he’s no parasite.

A parasite, then, is not so much an entertaining hitchhiker, as a hijacker: unlike in most symbioses, only the parasite benefits from a specific union. And whereas natural world inspirations, like clams and algae, are cooperative, pleasant affairs, parasitic relationships seem a lot more sinister.

“Viruses and bacteria can be parasites,” explains Eatherley. “A parasite doesn’t necessarily kill its host. So, it’s not really a predator. It just uses it. We’ve got so many bacteria in us and on us, that a lot of our body weight is probably bacteria, when you get down to it.” Obviously, many bacteria can be beneficial to humans too, but that’s still a creepy thought: the idea that something is feeding off of us, unseen, maybe influencing us, changing us, unbidden, without our knowledge.

And let’s face it, that’s what we really want to hear about, right?

Getting duped by what’s effectively an STD is, frankly, just not cricket: male crickets, or cicadas, that is, who become infected with a fungal parasite that makes them lure in other males, on whom to spread these fungal spores. “Male crickets don’t typically try and attract other males, because they’re not homosexual,” explains Eatherley, “but when they get infected with this fungus, they actually start signaling with the female wing flicks thing that a healthy male never does. So that just brings in the males for intimate contact. And then they catch the parasite.”

Lest we humans believe that our own sex drives are entirely natural phenomena, there’s a sneaky bacterium,?Treponema pallidum,?that can ramp it up for its own spreadable purposes. “Once transmitted to someone, their sex drive increases, and they, in turn, are more likely to spread the bacteria around,” says Eatherley. I’m not sure that David Cronenberg specifically had syphilis in mind (so to speak) when he made his feature debut?Shivers?(1975). But his whole body horror body of work starts with a sexually transmitted parasite that turns people into sex-crazed psychopaths. Oof. Suddenly, I think I have a headache.

Because we mostly associate rabies with dogs and other animals, it’s easy to forget how serious it can be if it takes hold of a human being. “Very few people survive a clinical-stage rabies infection,” says Eatherley grimly. “The virus targets the central nervous system and the brain, specifically the structures connected to memory, fear, and emotion, turning the hosts’ own brain chemistry against them.”

In these altered states, animals often attack any living creature close by. Human rabies patients have been known to suffer from hydrophobia: they become terrified of water and puffs of air. If left untreated, the confusion and hallucinations worsen, they flinch and twitch uncontrollably and, as with a rabid dog, the patient can lash out at imagined threats and bystanders. Thankfully rabies shots have been around for a while, so most people can avoid infection. Vaccines, eh, who’d do without them?

If you think back to 1982’s series-best?Star Trek?movie,?The Wrath of Khan, the most horrifying scene isn’t Spock sacrificing himself for the Enterprise crew. It’s an earlier scene where the villainous Khan captures Lieutenant Chekov and Captain Terrell, and inserts ceti eel larvae into their helmets, which then proceed to slowly crawl inside the poor men’s ears. Before the ensuing madness and eventual death, victims become highly susceptible to suggestion: mind control of a grisly kind. As you might expect, nature, too has similarly unpleasant antecedents.

“This is known as the ‘zombie ant fungus’,” smiles Eatherley. “The spores get inside the ant’s exoskeleton, feed on its organs and then produce certain chemicals. These cause the ant to climb up high on a tree and clamp its jaws around a leaf, something uninfected ants never do. Eventually, spores burst out of the ant’s brain, killing it and the airborne explosion then spreads as the spores float down to the jungle floor, infecting more ants and beginning a new cycle.”

The fungus appears even more devious than that. Ant colonies are renowned for detecting sick members and ejecting them from the group. However, this fungus is somehow able to remain undetected. “It’s like the incubation period you see in zombie films,” relates Eatherley, “when a bitten host still hasn’t fully turned or even exhibited any symptoms. It’s unbelievably skillful evolution.” So much so that the makers of hit video game?The Last of Us?were directly inspired by the cordyceps, giving it a terrifying evolutionary jump to having a similar effect on humans. Game over, man. Game over.

The Costa Rican Wasp and the Orb Spider?

One of the most nightmarish scenarios I’ve come across is this particular wasp and the spider it doesn’t use simply for food, but for, well, nursery construction. “The wasp lays its eggs on the abdomens of the unlucky spider, then proceeds to live off it, sucking the spider dry,” outlines Eatherley. “But that’s not its only parasitic use. The larva then injects a chemical into the spider which mind-controls it into building a new, trippy kind of web that will support the larva’s cocoon. It’s nothing like the spider’s own webs, and yet it submits to provide the larva with the ‘ideal home’ to develop into an adult.”

The Jewel Wasp and the Cockroach?

The double-tap sting the jewel wasp metes out to a hapless cockroach has two purposes, neither of them to kill it. At least, not yet. “The first disables its front legs to stop it fleeing,” reports Eatherley. “The second, into its brain, stops it moving of its own free will. It then guides the roach into its burrow, lays a single egg on its body, and entombs them together.” As the larvae grow they devour the roach from the inside out, emerging one month later fully grown – and fully fed.”?

PARASITE THAT TURNS ITS HOST INTO A ZOMBIE BODYGUARD

The Wasp and the Ladybird

We’ve seen earlier how mind control and zombification of a host by a parasite provides food and even a shelter for insect larvae. But the?wasp (Dinocampus coccinellae) goes one further and employs its host as a bodyguard. “The wasp inserts one egg only into a ladybird, and the larva develops inside it,” says Eatherley. “After about twenty days, it emerges from the ladybird’s body and spins a cocoon between its legs. But then the ladybird remains alive on top of the cocoon, twitching its body to scare off predators and keep the single wasp pupa safe.”

It’s an important strategy for a very vulnerable stage of growth. “The survival rate of cocoons protected by living ladybirds from a lacewing predator is roughly 65%. If cocoons are left unprotected or attached to dead ladybirds, none or at best 15% survive.”

As Eatherley outlined earlier, parasites aren’t strictly predators in the overt food chain sense. But that doesn’t mean some parasites don’t need their host to die to keep propagating. Think of them as torturous killers – who make their prey do their dirty work for them.

As its name suggests, this flatworm resides in the livers of grazing mammals. It then sets up a devious circle of life (and death) involving two other key creatures. “The fluke’s eggs are excreted in the host animal’s droppings,” explains Eatherley. “These then get eaten by snails, and the eggs hatch inside them. The snail creates protective cysts around the parasites and coughs them up in mucus balls – which are then eaten by ants.”

The flukes wend their way to the ant’s brain and force the insect to act a little like the way cordyceps fungi make them do. “Come nightfall the infected ant will climb to the tip of a blade of grass, remaining motionless there in a prime spot to be eaten by a grazing mammal – and the cycle can begin again.”

But there’s an even more cunning element to this process. What happens if the ant isn’t eaten? “It’s been observed that, in this case, the fluke allows the ant to descend from the grass blade and go back to its daily life,” marvels Eatherley. “This suggests the parasite has some understanding of time, because otherwise the ant would sit out in the sun all day, risking desiccation and death, without completing the fluke’s mission. So, it effectively keeps the ant, and itself, alive to commit the right kind of suicide another day!”

The Parasitic Worm and the Snail?

It’s another variation on the mind control madness that certain parasites seem to specialize in. “Here the?leucochloridium parasitic worm invades the snail’s eyestalks, engorging them and making them throb,” says Eatherley. “Some have even named it the ‘disco worm’ because of the pulsating effect it produces.”

Sadly, the worms don’t resemble disco balls, so much as juicy caterpillars. They force their host to leave its shady habitat and, as with the liver fluke above, put itself on display. “Predators birds mistake the snail for a caterpillar snack,” Eatherley continues, “swoop in, eat it, and eventually release more worm eggs in their own droppings. Which in turn, get consumed by new snails…” Even more cruelly, if a snail is fortunate enough to survive one foray into the open, the parasite-filled stalks will grow back, and make the snail head back out. Talk about murder on the dancefloor.

Into comic-book adaptations? Check out our interview with Y: The Last Man star Ben Schnetzer who discusses what would really happen if all the cis-men in the world died out, and the joys of working with a monkey co-star.