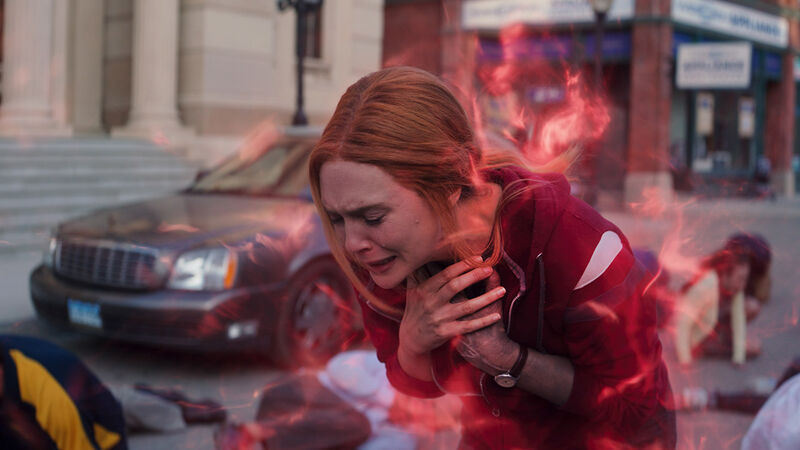 The latest Marvel Cinematic Universe series, The Falcon and the Winter Soldier, might already have landed on Disney+, but that doesn’t mean we’ve stopped chewing over the events of WandaVision. The visionary series has not only left us with questions over where the story goes next leading into Doctor Strange in the Multiverse of Madness and beyond, but also over how the heck they created some of the show’s impressive visual effects.

With that in mind, we stole some time with WandaVision’s supremely talented VFX Supervisor, Tara DeMarco. Armed with an arsenal of questions from Fandom’s Marvel community, she demystified some of the series’ most memorable effects – and pinpointed some moments you’d never consider might have been created digitally. DeMarco discusses the evolution of the Hex, unveils some wider MCU secrets about Vision‘s appearance, and how she’s taken inspiration from 1990s music videos. So, without further ado, let’s jump straight into your questions:

Venom1502jw: The Hex boundary transition VFX looked complicated. How did you decide on look and execution?

DeMarco: The Hex execution and look, first sequence, was really about the story we were trying to tell first and foremost. So, in Episode 4, when?Monica Rambeau goes through the Hex, it’s about mystery and not knowing where she went. We wanted this invisible boundary where you saw some television texture and [which] hinted to the audience where it went.

The Episode 5 boundary when Wanda came out is about her being mad — she does not want anyone to come in — and so making sure it grew and it was red. We [used] the language of television as much as possible to try to tell a story with that one.

The subsequent ones are really about how to change the character or the object from the exterior world to the sitcom world and what you see when that happens. So that would drive those decisions. Having so many Hex looks and knowing that it had to serve so many purposes was actually quite complicated to figure out.

Fandom: What was the most difficult effect to get right?

DeMarco: There’s sort of a bookend of Wanda creating Vision and then Wanda letting Vision go that needed to be beautiful and lyrical and emotional, and also really cool-looking and technical … so those effects, I think, took the most care. There were a lot [of effects] that were very complicated but we knew that those [in particular] would be challenging — and they had to be impactful, so we give a lot of care to them.

LR2159: Why did you decide to CGI vision’s silver head-pieces instead of using makeup like past movies?

DeMarco: He has always had a silver headpiece that was created in CGI. They used to put a whole prosthetic cowl on for Vision but they discovered across the movies that they didn’t end up using that too much – it would have to be out of focus because it wasn’t quite metal and the metal actually sits in his skin, and the panels that are drawn also sit in his skin. So they had replaced it many times before. They filmed with the cowl and with little – I know Paul [Bettany, who plays Vision] talks about his detachable earpieces so he could hear. But those ears are slightly closer than Paul’s ears so they might have to paint them out and put the CG ears closer [too]. We discovered that if we were doing all that CG work anyway, we might as well let Paul be a little bit more comfortable and not [have him] have to wear the full prosthetic.

TomN2: How did you film and edit the scenes in Episode 5, “On A Very Special Episode”, where the twins age themselves up?

DeMarco: We looked at 1990s’ morph music videos [such as Michael Jackson’s “Black and White” and the Backstreet Boys’ “As Long as You Love Me”] and wanted to make it similar, so we shot the smaller children against a green screen and lined them up.

We decided that where your eye goes in a morph is at someone’s eyes. Really, when you are looking at anyone’s face, you’re looking at their eyes. Then you might take in the rest of the features. So we lined up the height of the taller children with the little children at eye height and essentially filmed them locked off against green and then did a morph of one to the other.

BEJT: For the early episodes based on earlier eras, was replicating the visual effects style of the era easier due to them being intentionally less perfect-looking, or did it provide new challenges?

DeMarco: I don’t know if it was necessarily easier. The era-specific work was a challenge because it had to look great in black and white where there’s a little less to play with. A lot of the puppeteered work [where objects were floating, etc] looked so cool, and you could see the wobbly hand of the puppeteer [meaning] that if we enhanced any of it in CG, we also had to make sure it wasn’t too perfect. So it was lovely to have a guide of where we should take those scenes but I don’t think they were simple.

SuperSoldier767: When animating Wanda’s magic, how complicated is it to match the VFX with Elizabeth Olsen’s hand movements?

DeMarco: Honestly, we match her hand movements when we execute the VFX. So it is all up to Elizabeth Olsen and what she’s doing. We will cue off that and put something tasteful with her hands that isn’t distracting from her performance, or something that shows off her power. So, really, we let her do her thing and we just follow suit.

Cyklops: What was CGI that we wouldn’t expect?

DeMarco: I don’t know if anybody else would be surprised but the silly string was CGI [in Episode 6]. And the gazebo in the Halloween scene was CGI. Because of the nature of filming, I don’t think we had time to silly string and un-silly string … and clean that all up. And then the gazebo, because of the nature of the shoot days and the length of the builds, we needed to film it together and then destroyed for the battle and then also at night for Halloween. Just the way the schedule worked, they weren’t going to be able to film with it at night together so we ended up scanning and making a CG gazebo. Was that what you were expecting? Somehow I don’t think so!

Catch WandaVision on Disney+. To learn more about WandaVision and the MCU and to visit the Fandom shop to purchase from a curated selection of Marvel merch, click here. To read our interview with the showrunner and director of The Falcon and the Winter Soldier, click below.