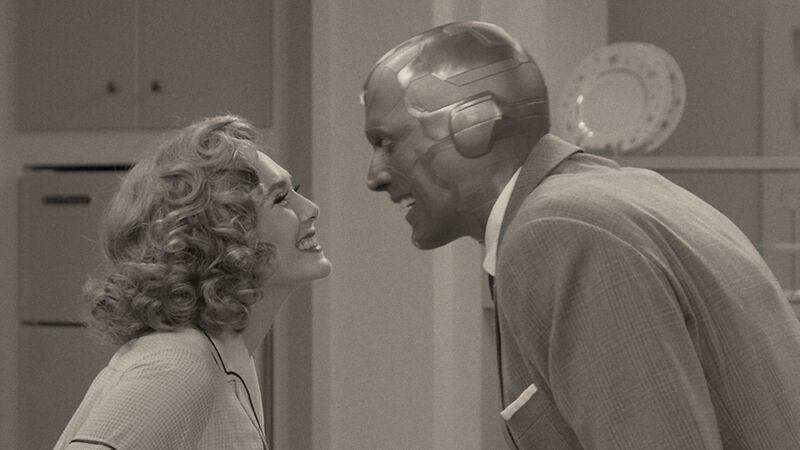 Sitcom Sorcery: How the Visuals of ‘WandaVision’ Are Created

As one of Marvel’s most ambitious projects to date, WandaVision acts as a visually dynamic magical mystery that unfolds over the course of several episodes and numerous eras of American television. As Wanda Maximoff deals with her post-Endgame grief inside the confines of a small New Jersey town she’s hexed into sitcom submission, the series takes us on a journey through several decades of classic TV comedies.

From The Dick Van Dyke Show to the Bradys to more Modern mockumentaries, WandaVision’s sets, aspect ratios, and tone shift and swerve with each episode, all while the regular MCU takes place right outside the city limits. It’s an amazing amount of vibes and themes to juggle and that task fell into the capable hands of cinematographer Jess Hall (Hot Fuzz) and production designer Mark Worthington (American Horror Story).

Fandom had a chance to chat with both Hall and Worthington about some of the challenges involved with recreating the homes of famous TV families and evoking epic eras of screen history.

Plus, what was it like to weave the “Agatha All Along” song into the ongoing production?

While fans noted that the first handful of WandaVision episodes seemed to channel the houses of The Dick Van Dyke Show, Bewitched, The Brady Bunch, and Family Ties, the idea wasn’t exactly to settle on one specific house, or family.

“It wasn’t so much about copying, or wanting it to be absolutely recognizable,” Worthington said. “We wanted the style and the tone to be, but for the rest to not land anywhere specific one way or the other.”

“We didn’t go consciously about landing on one sitcom or another, particularly,” he added. “We looked at the eras more and found what could express a ‘50s sitcom or a ‘60s sitcom or a ‘70s sitcom. And while you might have some recognizable pieces in there, it wasn’t about that. Because as you’ll also notice they actually also depart radically from anything that was ever done.”

“This is our sitcom,” he explained. “This is the WandaVision sitcom. If we had copied a certain sitcom it would be distracting. Because you’d spend your whole time thinking ‘Well, that’s not right.’ Or ‘Huh, that detail departs from what I expect.’”

“You can watch the story unfold and not worry about whether that thing over the fireplace is accurate or not.”

“It was unusual,” Jess Hall noted, about being very sitcom-centric for the first few episodes. “In a sense, you’re sort of restrained. You’re working with a filmmaking vocabulary that’s very specific. Our director, Matt Shakman, was a child actor on sitcoms so he already understands the sitcom universe and he was a great guide. But for me I just really had to respect the camera style from that period. I definitely had to work within a limited range. But then when you are limited you have more time to focus on the specifics and that’s what becomes really interesting. The level of detail that we went into in terms of creating that period lighting, in creating the softness of the image with the custom lenses and using the color signs to control the look of the image, became a big part of it.”

WandaVision is unique in that it not only transports viewers back to bygone eras of TV, its early episodes especially also featured the original aspect ratios and framing of those times. “There was constant mental activity going on there,” Hall said.

“As far as the aspect ratio goes, it was great to start in 4:3. There was a lot of debate about how the audience might feel about 4:3 and if they’d find it strange or off-putting so I was really pleased that we ended up sticking with it because it’s really authentic and it really worked.”

“We then had to be very aware about when we were going to transition out of the 4:3 and into the 2.39 (widescreen) because that required a certain awareness of the aspect ratio composition and how we were going to manage that. But it was really used at these key dramatic points, as a dramatic tool.”

Aside from the shifting frames of the Hex world, Hall wanted to always make sure the audience knew when they were in the Hex and when they were outside of it in the “real” world of the MCU, which is why even as the most recent episodes were no longer using 4:3 visuals for the sitcom scenes, they still didn’t look exactly like what we see S.W.O.R.D. experiencing outside. “All of the outside MCU footage is shot in 1.3x anamorphic,” Hall explained. “It’s not only the aspect ratio, it’s also the format. So the anamorphic lenses that we use, they were built for Infinity War and Endgame, specifically. And they have a different perspective to spherical lenses.”

“So subtly, you’re signaling the audience. You’re sort of encoding that image with a familiar MCU element that they’ve seen in a previous movie but also a rendition of three dimensional space and slightly different perspective than you see in the spherical work.”

“You also have the different color palettes,” Hall continued, “and I was always trying to play with the contrast there. Like in the warmth of Episode 3 and the first time we see?Monica get ejected from the Hex and she goes into this kind of cool, cyan blue/green world of the practical lighting of a disaster military base.”

Agatha (Filmed) All Along

Episode 7 capped things off with a big villain reveal when Wanda, and viewers, learned that Kathryn Hahn’s next door character, Agnes, was really Marvel witch Agatha Harkness. What followed was a mock opening credits sequence, complete with an earworm bop, for “Agatha All Along” – a show within a show (within a show) demonstrating how Agatha had been manipulating events in each of the prior episodes.

Which meant that the sequence had to be filmed a little at a time over the course of the season.

“We were in those scenes, in other episodes, and then we’d have to go ‘Okay, we’re ready for the Episode 7 bit,’” Hall said, adding, “And those moments were set up as a single shot. They’re all kind of a oner, basically, whether she comes down and lands and transforms and then she turns or the other parts. So we always had a slightly different vocabulary for those.”

“They were often more complicated camera moves than we’d be using on the episode. So we’d be like ‘Okay, bring in the technocrane. Now we’ve got to do the transition moment.’ It was a lot of fun. And Kathryn Hahn is such a great actress that she brought something new and great to each one of those moments.”