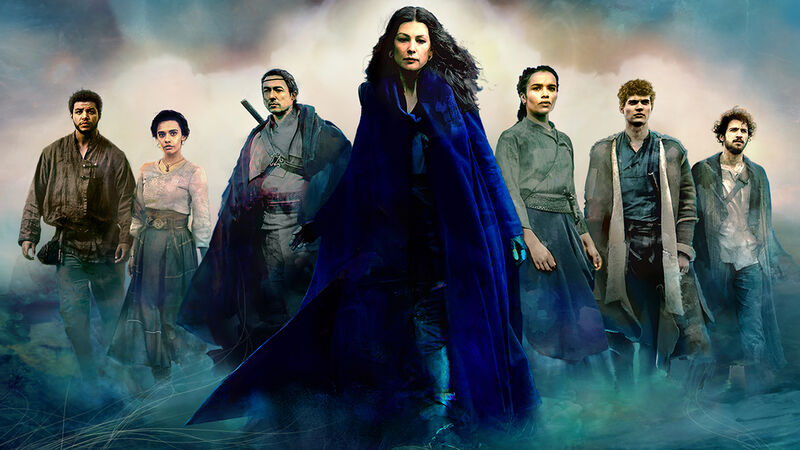 With the premiere of the Amazon Prime series here, the sprawling saga that is The Wheel of Time has finally been realized in live action. Whether you’re a longtime lover of the 14 tomes (and one prequel) that make up Robert Jordan and Brandon Sanderson’s series, or a curious newcomer who doesn’t know a ta’veren from a trolloc, there’s a good chance that binging the show will make you want to tell your own tales set in Jordan’s world.

Dungeons & Dragons can help you manifest these stories. In fact, D&D and The Wheel of Time’s roots run deep. Some might recall The Wheel of Time Roleplaying Game, which was rooted in D&D’s third edition and featured a forward by Robert Jordan himself where he spilled juicy details on how he ran his son’s D&D games. Jordan insisted that he was a by-the-book Dungeon Master who wasn’t afraid to kill a character or two. But he also believed that detailed worldbuilding and a sense of adventure were more important than the whims of the dice. With a little work, you too can bring these attributes to a D&D game, infusing the heroic chronicle that Jordan created with your own imagination.

The whims of ta’veren

The Wheel of Time is classic epic fantasy, stemming from the same lineage as J.R.R. Tolkien’s works. Like Tolkien’s hobbits, the central figures of Jordan’s story — Rand al’Thor, Mat Cauthon, Perrin Aybara, Egwene al’Vere, and Nynaeve al’Meara — come from a quiet backwater town. Despite these humble origins, they rise up in the face of mortifying odds to become champions, leaders of vast armies and magnificent spellcasters who turn the tides during Tarmon Gai’don, the Last Battle against the sentient evil known as the Dark One.

This evolution mirrors the growth of a D&D party, who might begin their adventuring career struggling against goblins at 1st level but end it staring down multiversal threats at 20th level. At its heart, D&D is a game about an alliance of like-minded players coming together to guide their characters along this path, and there’s a word in The Wheel of Time —ta’veren — which is quite appropriate. Ta’veren are individuals who influence the Great Pattern woven by the series’ titular cosmic Wheel, altering the threads of fate around them. In a game of D&D, the players are ta’veren, while the Dungeon Master is the Wheel itself, reacting to the deeds of these heroes and subtly changing the story based on their actions.

In order to create characters and begin that ta’veren journey, all a beginner D&D player needs are the fifth edition basic rules, which are available for free. Those who desire more detail should get the Player’s Handbook and peruse the available races.

Myriad worlds made by the Creator

The Wheel of Time takes place in a world architected by a mysterious Creator. The world curiously lacks an official name but is referred to by some fans as “Randland,” after the main character Rand al’Thor. Randland is renowned for its intricate detail, with much of The Wheel of Time focused on the Westlands, which contain locations as varied as the shining metropolis of Tar Valon to the Aiel Waste, a harsh desert region. Jordan also detailed realms beyond the Westlands, including the Seanchan empire as well as alternate, unfinished realities and Tel’aran’rhiod, the mysterious World of Dreams.

The Wheel’s worlds mirror D&D settings, all of which are connected in a vast multiverse encompassing multiple planes of existence. The majority of fifth edition D&D adventures take place in the Forgotten Realms, a high fantasy setting that was first published in 1987, predating the publication of the first Wheel of Time novel, The Eye of the World. But the Forgotten Realms are far from the only place to set D&D adventures. A campaign could easily occur in Randland itself, either during the events of The Wheel of Time or perhaps in the Age of Legends, when the great mage Lews Therin Telamon led his followers under the banner of the Dragon.

Aspiring Dungeon Masters intent on making their own version of Randland should begin with the Dungeon Master’s Guide, which contains advice on everything from building believable towns and cities to formulating religious pantheons. And while many of D&D’s supplementary books feature substantially more in the way of magic and fantastical creatures than The Wheel of Time, they can still serve as excellent inspiration. For instance, Van Richten’s Guide to Ravenloftfeatures advice on horror adventures that is instantly applicable for recreating the eerie “bubbles of evil” that emerged in The Wheel of Time when the Dark One’s powers caused freakish accidents and hallucinations. The upcoming Strixhaven: A Curriculum of Chaos will also be useful for Dungeon Masters hoping to tell tales in Tar Valon’s White Tower, the foremost school for students of the One Power – the force that passes for magic in The Wheel of Time.

Heroes and channelers
of the Power

D&D’s character classes and subclasses are the game’s bread and butter, and in order to have the full range of options available for a Wheel of Time game, Xanathar’s Guide to Everything and Tasha’s Cauldron of Everything should be the next manuals for those who already own the Player’s Handbook. While not every class within these books is appropriate for The Wheel of Time, most can fit within Randland with minor tweaks. Since channeling the One Power is an uncommon skill in The Wheel of Time, for instance, classes that don’t rely on magic are easy inserts. Barbarians work well for the nomadic Aiel people of the Aiel Waste, while Fighters and Rogues are common across the Westlands.

When it comes to D&D’s spell-heavy classes, the rich history of Robert Jordan’s world must be considered. In The Wheel of Time, spellcasters are called channelers, and the One Power has both male and female halves. In the Age of Legends, the Dark One tainted Saidin, the male half of the One Power, in an act of revenge against Lews Therin Telamon. As a result, female channelers, known as Aes Sedai, are the de facto standard at the beginning of The Wheel of Time, while men who can channel typically fall into madness and are shunned by society. Later books in The Wheel of Time do feature the eventual cleansing of Saidin, as well as the male counterparts of the Aes Sedai, known as Asha’man. Dungeon Masters hoping to honor the lore implications behind the sex of a magic-wielding character should carefully decide which time period to use for their campaign, and then communicate this to their players.

Once this is decided upon, it’s easy to find analogues between D&D’s spellcasting classes and The Wheel of Time’s many characters. Sorcerers can easily serve as both Aes Sedai and Asha’man, while Wizards can represent so-called Wilders, a name given to those who learn to channel the One Power on their own, without the aid of a school like Tar Valon’s White Tower. Warlocks can represent followers of the Dark One — known as Darkfriends and the Forsaken — while Bards are an excellent class for the traveling Tuatha’an folk, who live in bright wagons, sing spirited songs and tell evocative tales of times long past. Paladins and Clerics could be intriguing choices for a character connected with the Children of the Light, a zealous military organization dedicated to destroying Darkfriends and male users of the One Power. How might a male channeler in the Children of the Light hide his abilities from superiors?

Aligning The Wheel of Time’s main figures with D&D’s classes can also be a fun exercise for Dungeon Masters who want to feature Jordan’s characters in their campaign, or even assign them to players. Rand ‘al Thor, who ultimately ascends to master both the heron-marked blade and the One Power, could be a Fighter of the Eldritch Knight subclass, or perhaps a multiclassing Paladin following the Oath of Redemption combined with a Wild Magic Sorcerer. Matt Cauthon could either be a Battle Master Fighter or a Swashbuckler Rogue, while Perrin Ay’bara is most assuredly a Barbarian following the Path of the Totem Warrior. Egwene al’Vere and Nynaeve al’Meara could be a Wizard specializing in the School of Evocation and a Cleric of the Life Domain, respectively.

Shadowspawn and keepers
of the forest

Last but certainly not least, no roleplaying adventure is complete without a smattering of fantastic beasts. The Wheel of Time features less in the way of creatures than other fantasy series, but those that exist are memorable and easily transferable to D&D.

The vast majority of monsters in The Wheel of Time are the Shadowspawn created to supplement the Dark One’s troops. Of these, trollocs are the most common. These man and animal hybrids bear similarities to several creatures in D&D’s Monster Manual, including orcs and bugbears, but the bloodthirsty hyena-like beastmen known as gnolls are probably the closest analogue.

Myrddraal, the eyeless leaders of trolloc armies, could be the undead humanoids called wights, while the living shades known as Gray Men can use the statistics of the Monster Manual’s shadow. Draghkar are similar to the Monster Manual’svampire or vampire spawn, particularly since they already sport bat-like wings, and the Dark One’s deadly darkhounds are uncannily close to the shadow mastiff found within the pages of the D&D supplement Volo’s Guide to Monsters.

Finally, while The Wheel of Time is largely a human-driven story, special attention must be awarded to the gentle D&D giants known as firbolgs, also nestled within the pages of Volo’s Guide to Monsters. Firbolgs are kind protectors of the woods who keep to themselves, enjoy living in harmony with nature and prefer a slower, more measured approach to all things in life. This is a spot-on description of ogier, the sole nonhuman race within The Wheel of Time. Loial — the bookish but brave ogier comrade of Rand al’Thor — is an absolute match for a firbolg’s stats, and a D&D campaign starring similarly courageous ogier who wish to venture beyond their forest enclaves would be a fine tale indeed.

The Wheel of Time turns,
and Ages come and pass

The Wheel of Time is first and foremost a narrative about brave souls fulfilling their destiny, influencing the strands of fate and fighting an overwhelmingly powerful enemy. It is an archetypal story of good versus evil and perfect fodder for several sessions of Dungeons & Dragons, particularly since Jordan himself gave the game his stamp of approval.

If you’re looking to follow in his footsteps and form stories of your own ta’veren, be sure to visit D&D Beyond, ready your Player’s Handbook, and prepare for the next great turning of the Wheel.

As Mat Cauthon would say in the Old Tongue: “Dovie’andi se tovya sagain. It’s time to toss the dice.”